A few months ago I received a note from Ben Budick, Class of 1967 thanking me for my efforts with the Rockaway web site.  We exchanged a few letters and Ben was kind enough to send a few photos which I posted.  In one of his notes, he made reference to a song that he had written 25 years ago about Beach 35th Street.  I think at this point, I'll let Ben tell the rest of the story.

In 1982 I dreamed a song. I woke up in the morning with the melody, most of the lyrics, and even the arrangement imprinted in my brain. I'd heard of this happening to other songwriters, but it was the first and only time it ever happened to me.  I'm sure it had been festering in my mind for years. Ya see, like you I'm a Rockaway kid. And like you there was a part of me that was mourning the loss of the place. At the time my parents still lived in Far Rock and every Summer I'd go out there to go to the beach. Of course out of habit I'd always drive over to Beach 35th, park the car, and spend the day.

But by 1982 I had the beach to myself. On a hot day in July, the total population of Beach 35th was my wife, my dog, me, and all the ghosts. It was like Dresden after the war. Nothing was left. The Bungalows, the great hotels, Fascination, Paul's Bumper cars, Jerry and Rita's Knishes (I worked there for 2 Summers), Sam's, Howe's baths, the movie theatre, the Stadler's miniature golf, the Italian Ice place, Tuckee Cup, the Kiddie Park on 32nd, Big Steve's rigged games..  GONE...

So the song just sorta emerged full blown from a dream. And then, the next year, I had the opportunity to record it. I was real happy with the results, but the record company wasn't and it was never released. They didn't feel it was commercial. Other than occasionally pulling it out and playing it to friends, Boardwalk remained my little secret. It was me. And I came to realize the only people that would truly appreciate it would be other kids who were lucky enough to have grown up in this magical place.

I kept going to Rockaway on summer days 'til my parents retired to Florida in '88. I do know that the last time we went we found a bunch of chicken carcasses on the beach, and we couldn't figure out how in hell they got there. Found out they were part of some Santeria rite. The Rockaway I knew hadn't changed, it had literally disappeared. For many years I kept my loss to myself.

When I found this website I realized I wasn't alone in my mourning. For the last several years I'd log on once a week or so and just hook into this lost world. It was comforting. But I didn't start communicating with Skip Weinstock 'til about 2 months ago. I sent him some photos I had.  Then a few weeks ago I told him about the song. Skip REALLY wanted to hear it. Since I only had it on cassette I had to jump thru some hoops to get it transferred to the computer.

Skip Weinstock has taken my imagery and given it visual substance. And he's done a Wonderful job.   I hope you enjoy it.

By the way, I'm sure you'll realize there is one glaring mistake in the lyrics. For some reason in my dream the 2 places on the corner of 35th and the Boardwalk were Jerry's and Dave's. Of course it was Sam's, not Dave's.  I didn't realize this mistake 'til AFTER I finished the recording. Mea Culpa.  Blame it on the herbal enhancement I was so fond of at the time.

I believe that Ben has captured in his song what we all feel about Rockaway.  I'm sure that his heartfelt tribute will move you as it did me.  It is with deep sense of pride and appreciation that I present Ben's excellent work, There Used To Be A Boardwalk Here.  I'm truly grateful that after 25 years, it will now see the light of day.  Be sure to turn up the volume on your speakers and maybe have a box of tissues near by!  Click on the screen below to take you to the song. 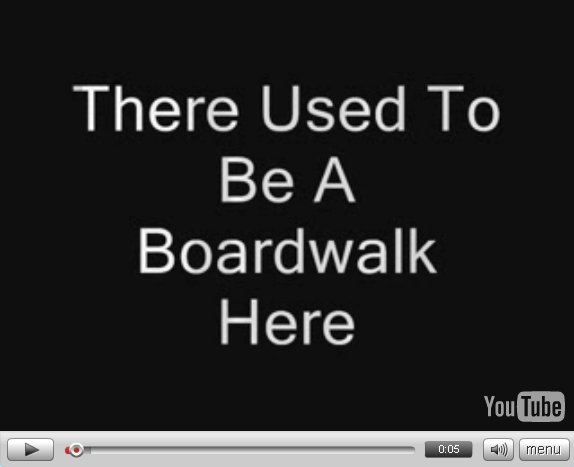