Just found your site today. There was an old photo of Rockaway in today's Times (Tues April 19), accompanying an article about NY politics. Bobby Kennedy was campaigning for the senate, sometime in 1964 (early September?) and he had a rally just off the boardwalk. The question is where was the photo shot.  Any thoughts? 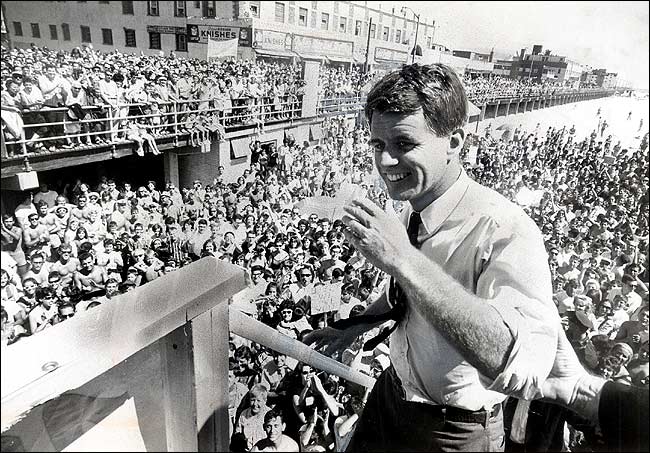 The Knish place may give it away-I think it may be Beach 69th street in Arverne. Was this "Jerry's famous Knishes?  I remember it was right next to a penny arcade , but I can't make out the signs too well, even when I enlarge the photo.

This photo has stirred many memories-do you have any sources for other photos of Arverne in the 50's and 60's?

My grandmother had a bungalow, fronting on Beach 69th St, perhaps 50 yards from the boardwalk; my family
summered there until 1968. I went to the Hartmann Y Day camp-originally it was centered around Beach 70/71st, but then they opened a big new facility in Far Rockaway in 1964(?).

Is there anyone else out there from Beach 69th street?

OK Sleuths.....get your glasses on and take a look at the link below.  Elisa Bachrow Hinken has written indicating that the photo may have been taken in Long Beach, NY and not Rockaway.  After checking out the photos write and let me know what you think.

Last Week The Wave published a photograph that had appeared in the New York Times questioning whether Robert Kennedy had been campaigning in Rockaway in 1964. While the scene of Kennedy standing on a boardwalk did not look like Rockaway, we asked readers to clear up the mystery. A number of people, Rick Gold included, said that Kennedy was actually in Manhattan Beach and that he was playing basketball nearby and actually shook hands with the Senatorial candidate. More compelling, however, was Seth Patton’s notice that RFK was actually in Long Beach, nearby National Boulevard. Patton says that he was a lifeguard there when Kennedy came in 1964. To back up his contention, he referred us to the Long Beach website, which included this picture of Kennedy at Long Beach that day, and there is no doubt in our minds that he’s right.

The thing that makes me think that this might be rather than Rockaway is the fact that there are no stairs from the boardwalk to the beach. There is no direct beach access in , and one has to go through the gate and pay to get in. There even looks like there is a building with awnings under the boardwalk.

For the length of boardwalk shown in the picture, I think there would have been stairs if it were Rockaway.

I can see why you thought it was that area because there were several stores along that strip of the boardwalk with the Knish store at west end of the strip. However, from the Knish store, heading eastward, was a fresh waffle and ice cream store, Abe's Pool Room, a Penny Arcade, the entrance to the Lockers, and lastly the Pizzeria. The exact sequence of the center stores escapes me, but the Knish/Frankfurter store was on the west end and the Pizzeria was on the east end of the strip of food stores/amusements. Then, east of the Pizzeria was a set of stairs with metal railings on the sides that led down from Beach 69th Street to the sand and sea shore. As a matter of fact, there should be a series of wooden stairs, one at each street in that area - looking eastward - and I do not see any stairs. That is why I do not believe that photo was taken near the stores by Beach 69th and 70th Streets. There were definitely steps that lead down to the sand in before and after 1964. So, it must be at another location, but I am not sure of the location.

Good luck in your search. I am curious as to where it could be. If you find out, please let me know.

I believe the photo of Bobby Kennedy was in Long Beach.  My Uncle was President of the Long Beach City Council when I was a child; I remember seeing color photos of Kennedy with my Uncle in Long Beach.  If I can get a hold of the picture from my family, I'd be happy to send a copy.

Regarding the picture of Bobby Kennedy in 1964 at the boardwalk, I tried enlarging it to read the names of the stores, including the knish store, but it was too grainy to make out.

I am certain that this picture is not of the boardwalk in Rockaway beach because we did not have stairs like that. The stairs that Kennedy is climbing are parallel to the boardwalk and have a wooden top rail. Rockaway Beach stairs were perpendicular to the boardwalk and had metal tubular railings. I know, because I used to sit with my legs through the railing as a child when we watched the fireworks on Wednesdays in the summer. Oh how I wish I could still do that.

Sorry I could not have been more help.


I grew up in Rockaway, one block from the beach on beach 64th St., and later on Larkin Ave, between Beach 60th and 61th St. .  I have to agree with everyone, This is not a picture of Rockaway.  The Rockaway boardwalk had steps to the beach approximately every 100 yards, and nowhere was the bottom of the boardwalk closed up to the beach.  Rockaway was a small community, and anytime something big was to happen, everyone knew about it. Also I think that we are not so old or young that we would not remember if Bobby Kennedy had come to town.
Donna Santoro-Ferenczi    Email Address:  donnaferenczi@yahoo.com