Hal and Gloria's Luncheonette
Under the 'El' at 25th Street 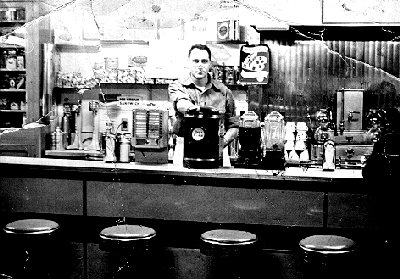 This photo was probably taken in the late 1940s or early 1950s. This is Harold Schain (or better known as Hal). He was my father. He and my mom owned the luncheonette on Far Rockaway Boulevard from 1947 to 1957. I am sure that there are many FRHS grads that remember skipping a class here and there and getting a soda or malted in that store!!  In August of 1957 my father met his untimely death at age 33 in a two-seater plane crash. His passion was flying. I was born in October of that year. That's when Ellie and Phil purchased the store from my mom.

It is with mixed emotions that I write to you today.  Sad because an era has come to an end and happy because I am able to share some photos with you.

In February, my mother, Gloria, passed away.  She was a Rockaway resident since 1947 when she and my father, Hal Schain, were married and made that move from Brooklyn to Far Rockaway.  They purchased the luncheonette on Far Rockaway Boulevard and 25th Street and it soon became THE hangout of teenagers and the morning stop before the commute to business in the big city.

I know that I had sent  a really wonderful photo of my father in the store.  But the photos that I found this time are truely priceless.

These photos show the faces of the individuals that patronized Hal and Gloria's luncheonette.  It is a freeze frame of a moment in time.  Maybe you recognize some of these faces?  Maybe visitors to the FRHS website will recognize themselves.

I would love to hear from anyone who does recognize themself and tell me their memories of my parents.  As I mentioned in my previous email to you, my father, Hal Schain, had a love for flying and unfortunately lost his life doing what he loved in 1957 two months before I was born.

So just hearing bits of memories from anyone is gratifying and will be added into a family tree for my children so they can know more about their grandparents.

Thank you Skip for all you do for Far Rockaway HS alumni.

You can reach Jody at jrleshinsky@gmail.com

Thanks Jody for this wonderful memory. I know that I spent many afternoons on one of those stools.


If you have any photos to share, send them to rockaway@astound.net