The outdoor scenes of the 1968 Frank Sinatra movie 'The Detective' were filmed in New York City.  There is one recognizable scene in particular that was filmed in Rockaway.  Below are several still frames from the movie.  Can you identify the street that the building was located on?

Trivia - Frank Sinatra was supposed to costar with his wife, Mia Farrow in this film but a film Farrow was working on was running behind schedule, so she refused. Sinatra got so mad, he made the film without her (casting Jacqueline Bisset in the role instead) and served her divorce papers on the set of that film, Rosemary's Baby 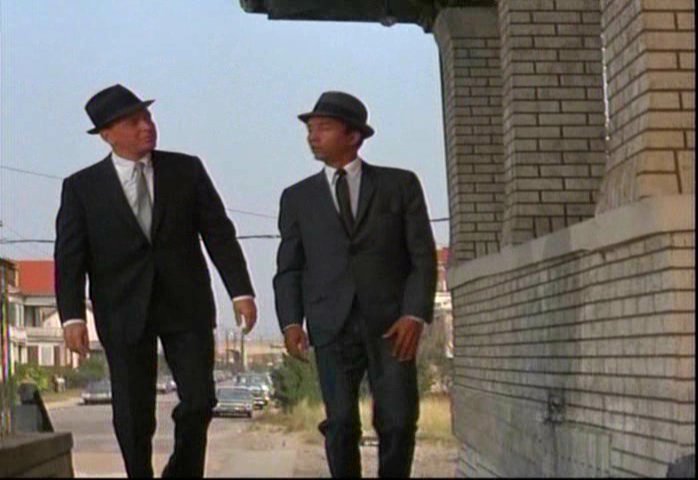 Frank Sinatra and Al Freeman Jr. - You can see the subway 'El' in the background 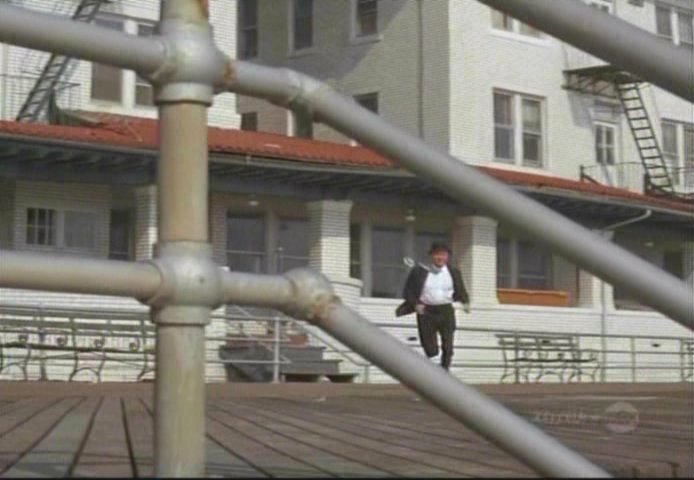 Frank Sinatra exiting the building onto the boardwalk 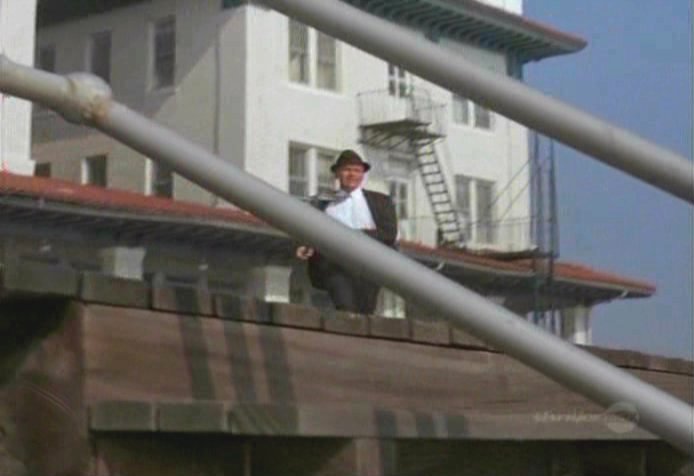 Frank Sinatra approaching the steps down to the beach 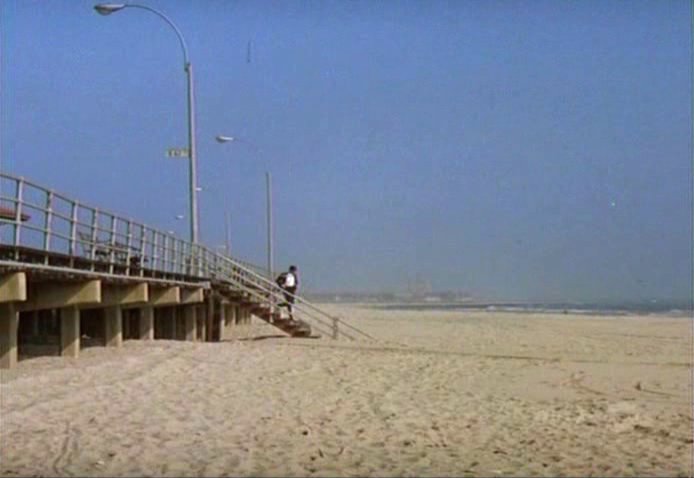 Can you make out the sign on the light pole? 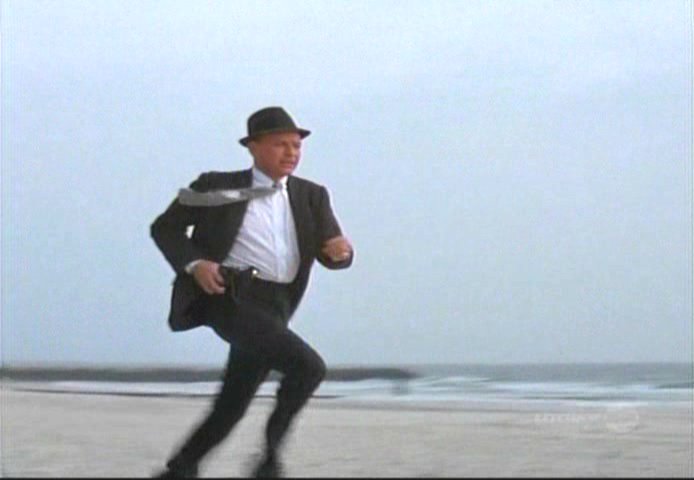 Old 'Blue Eyes' on the beach at Rockaway - 'Hey, get off my blanket and quit kicking sand!' 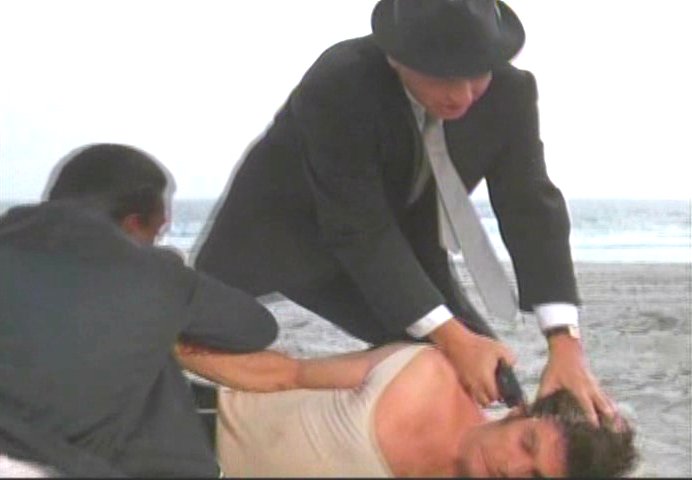 Frank Sinatra arresting the suspect, Tony Musante, on the beach at Rockaway

If you are aware of any other movies that were filmed in Rockaway please let me know and I'll create a page for them.  I already know that the Woody Allen film, Radio Days, has many scenes from Rockaway and I am presently working on that one.  But if you know of any others, please email me at rockaway@astound.net.

The Detective Was filmed at my old surfing spot in Arverne, Beach 62nd Street and the hotel on boardwalk was a rooming house for the elderly, which the film crew carpenters really fixed up for the shoot.  That scene was shot Oct. 15 1967, and the reason I remember, was that I was returning to St. Albans Naval Hospital that day after a 14 Day Leave from the Navy and wanted to be there even though I was on crutches recuperating from my injuries.. Take Care Now 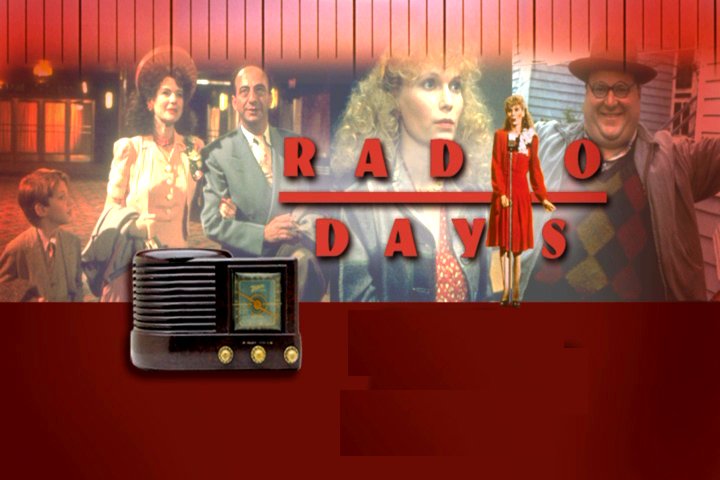 Hi Skip, I am a big fan of the website www.imdb.com and recently came across a new movie in production called "Rockaway" to come out next year.  Rockawayites might be interested in reading the story line and seeing the movie when it comes out.

Thanks Nancy.....here is the story line per the imdb website.

Trane returns from the war in Afghanistan as a hero. But there is no hero's welcome awaiting him when he steps off the A-train onto the Rockaway Beach platform in Queens, New York. Instead, he finds a world he once called home now overrun by thugs and second-rate Russian mobsters. His own home, where his wife and child once resided, is now a brothel operated by Juju, a local thug, and Trane's own sister Cari, a lost soul caught up in the ugliness that has taken over. Trane retreats to the quiet beaches of Rockaway to try to make sense of this bizarre reality and stumbles upon Dave, a wise homeless man and acquaintance, who lives under the boardwalk. Dave informs Trane that the death of his wife and child were not simply a petty crime gone wrong but the actual workings of a complex faction of the criminal element that has a stranglehold on the community. It is because of Trane's willingness to right the wrongs, and seek vengeance and retribution for the deaths of his family, that he sets out on a quest to find the men responsible and make things right again.

All the Edward Burns movies are filmed in Far Rock.

"She's the One" with Cameron Diaz and Jennifer Aniston

"No Looking Back" with Lauren Holly.

A Law and Order episode from last season had a guy falling from an airplane onto Rockaway Beach. The camera panned from the water to the shore. It then showed a view from the sand of the concession stands in Riis Park, a view which I remember from having worked there in the summer of 1971. I grew up in Edgemere and Arverne. I joined the Navy in 1975, and haven't been in Rockaway since 1977.

Also, the opening sequence of Flamingo Kid shows Matt Dillon on the Marine Parkway Bridge going towards the Rockaways.

Thanks for a great web site,

Featuring a very young Tony Curtis (this may have been his first screen credit), City Across the River was a 1949 "teens-in-trouble" film in which Curtis and a pal drive from Brooklyn across the new Marine Parkway Bridge to toss a murder weapon into the bay.  Not quite a Rockaway film, but oh so close.

There is a film that shot in Bayswater and Arverne in 1997 - No Looking Back, with John Bon Jovi, Blythe Danner and Lauren Holly. They used interiors of a house on Dickens Street, in Bayswater. I worked next door, and we had movie trailers on the street, and I got to see the furniture that the film company had used in the house. the film never was a hit, but it is avaiable on video.

A famous Seinfeld episode had Kramer hitting golf balls from the beach in Rockaway. George Costanza is walking along the same beach with a girl who he is trying to impress by saying that he is a marine biologist. Kramer's golf ball lands in the spout of a whale who gets beached in distress. The last line in the show is someone calling out for a marine biologist as George has a look of panic on his face.

In response to your inquiry about the beach that the movie "The Dectective" was filmed, it was Beach 62nd Street, back in 1966 or 1967. I remember this because my mom used to take us to the dentist on Beach 54th Street, next to the "new" library (at that time), between Beach Channel Drive and the "EL". She did not like walking with small children on busy streets, so she would walk down to the boardwalk and take it to Beach 54th Street and then walk up. We went by the hotel pictured and saw a film crew on the beach filming some action. She didn't know it was Frank Sinatra back then, or else she would have sat there and missed our appointment!!! Anyway, it was filmed in 1966 or 1967 because my youngest brother was still in a baby carriage for long walks. I guess it took a year or two to release it.

Another movie that was filmed in Rockaway was "The Flamingo Kid" with Matt Dillion. The beach scenes were filmed at the Silver Gull Beach Club in Breezy Point. The roadster scenes with Richard Crenna were filmed on the road between Breezy Point and Fort Tilden.

Wasn’t Flamingo Kid filmed at the beach club near Breezy Point? I found this on the web:

“The 1984 Garry Marshall film The Flamingo Kid centers on a fictional beach club set in Atlantic Beach. The film was shot on location at an actual beach club in Breezy Point on the Rockaway Peninsula.”  Also there is a not well known film called "Out of It" starring Barry Gordon and John Voight which had some important scenes filmed on the Far Rockaway HS football field.  Also the 1952 film “This is Cinerama” had a very important thrill scene filmed on the roller coaster at Rockaway Playland.

I believe that Orphans starring Albert Finney was filmed in Rockaway. I grew up in 71 (71-15 Beach Channel Drive/Carleton Manor). I remember meeting Albert Finney when they were filming at an old house facing a church on Rockaway Beach blvd. on maybe Beach 77-78th? I was about 11-12 years old at the time. Matthew Modine was in the movie as well. The movie came out in 1987. Any questions let me know.  Thanks

The movie Dream's Don't Die with actor Paul Winfield 1982 in front of Martins Corner on Bch.98th st. among other places.

The Detective was shot on Beach 59th Street before Ocean Village was there.
There was also a film shot in several locations thru out Rockaway and it starred Jon BonJovi  see No Looking Back (1998)  I was involved with their location Beach 94th Street (First Congregational Church of Rockaway Beach where they used our Chapel for hair,makeup and costume, they also shot some of it in Far Rockaway at the PAL building on Cornaga and Beach 19th Street and at a House located directly behind The Bayswater Jewish Center on Dickens Street and Healy Ave. the film had a different title during shooting and when it came out we found out that it had been renamed.
Hope this was of some help,