Rockaway: A Reminiscence of October

I found this quote from Woody Allen’s movie “Radio Days” in a book today:

"The scene is Rockaway. The time is my childhood. It's my old neighborhood, and forgive me if I tend to romanticize the past. I mean, it wasn't always as stormy and rainswept as this. But I remember it that way because that was it at its most beautiful."

Ironic and yet true. The daytrippers came when the sun was out and the sky was blue. The locals remained through the gray, wet off-season.

The first time I left Rockaway was July 1958. My parents took me away from the sun and blue sky for a month’s vacation to visit relatives in gray, wet Ireland. I was twelve, and I was not amused. When I got back home, I couldn’t wait to get into my bathing suit and go down to the beach.

The last time I left Rockaway was June 1965. My career moves took me first to Detroit, then Milwaukee and finally to Rochester, New York. I came back to Rockaway many times, summer and winter, to visit but never to stay. The last visit was October 2001, about half way between September 11 and November 12. It was in the off-season.

Air fares were very cheap, and my wife convinced me to make an impromptu visit to my Long Island relatives for the weekend. My brother and nephew in Lynbrook both had prior commitments, so I drove myself out to Rockaway on Sunrise Highway. My plan was to drive by each of the houses that we lived in when I was growing up, to see what was left of the old neighborhoods. 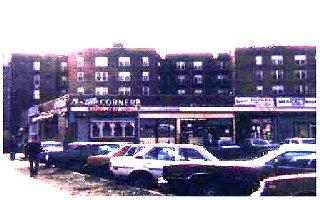 I never lived in Far Rockaway, but I drove past Wavecrest Apartments where our dentist had his office. My first stop was 69th Street and Beach Channel Drive, where we had a third floor apartment from 1957 to 1963. This was home when I attended Junior High School 198 and Far Rockaway High School. The house looked the same, and the neighborhood really didn’t seem to have changed that much.

Next stop was Beach 99th Street. When I lived there from 1963 to 1965 it was only one block from Rockaway’s Playland and just down the street from St. Camillus church. The house where we lived is still there and so is the church, but the amusement park is, sadly, long gone. The street dead ends a half block from the elevated subway station, and my mother could watch my father get off the train from the front windows of our second floor apartment.

I knew that the stretch of Rockaway Beach Boulevard that featured dozens of bars and small hotels had been torn down in the early 60’s, so I drove up along the beach to 108th Street. The old bus stop shelter made of poured concrete and shaped like a wave was still there, but it has been decorated with paintings of surfers. The park behind it has been improved with new play equipment, and the spot where McGuire’s Bar used to stand is now a roller hockey rink.

My elementary school, P.S. 43, at 110th Street was also torn down while I lived there, as were the nearby bungalows where we stayed when we first came to Rockaway. I headed on to Beach 114th Street to hunt for the house that we lived in for one year, 1956. On this street, like most in this neighborhood, the houses sit one behind the other. We rented one of the back houses, and to this day, 45 years later, I can’t remember exactly which one it was.

It is much easier to remember exactly where we lived from 1951 to 1955, which was 115-02 Rockaway Beach Boulevard. I must have memorized that address in the first grade for my five block walk to and from P.S. 43. The blocks were all commercial, store fronts with apartments above and behind. Our apartment was on the first floor of a four family house situated down a narrow alley behind Dotty’s Appetizing deli. Next door to Dotty’s was Maskin’s men’s clothing store. The property, and all the other properties on that side of Rockaway Beach Boulevard, backed up to the Long Island Railroad tracks that terminated at 116th Street.

Dotty’s and Maskin’s are gone, but I can’t remember what replaced them. My attention was drawn, as it has been on prior visits, to how narrow that alley is between the two stores. I would estimate that it is less than three feet wide, and the new owner has put a wrought iron gate at the entrance. I peered through the gate and the long shadows behind it to catch a glimpse of the front stoop of the old house. The house itself is obscured by the building in front, and the gate was, of course, locked. I focused instead beyond the back fence on the New York Subway cars that replaced the Long Island Railroad many years ago.

My next stop was, as it always is, Rogoff’s toy store on 116th Street. The store is there, and the name is the same, but the Rogoff family no longer operates it. In my youth it contained everything a boy could desire, from Dinky toys to model airplanes. Now it looks like just another mall toy store with no local flavor. I asked if they had any Rockaway items and was met with a blank stare. They didn’t even have any local postcards among their measly collection of New York City scenes.

The other landmark on 116th Street was the Admiration Cigar store, more commonly known as the candy store. It had featured a soda fountain, a comic book stand and more candy and bubble gum than I could afford. Now it is a luncheonette and lotto parlor, frequented by people who are older than me by at least twenty years. The woman behind the counter didn’t mind my wandering around because she was too busy servicing the endless line buying lottery tickets. I liked the hand-written sign behind the lunch counter that said, “Enjoy your first cigarette with your coffee. Take the second one outside.” 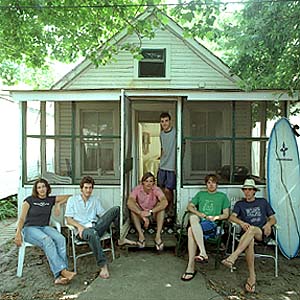 The fire house is still there, as is the train (now subway) station, but the rest of the businesses are all different. The Park movie theater is gone and so is the library. I wandered into one of the new shops, which was called something like the Rockaway Surf Shop. We used to “ride the waves” in my day, what they call body surfing now, but no one ever brought a real surf board to the beach. The woman in the shop insisted that Rockaway is now a magnet for surfers in the northeast. She said that enthusiasts all follow the weather reports and come to the beach when the waves are their biggest, usually in the winter. That would solve the problem I used to have as a body surfer: crashing into all those middle-aged daytrippers paddling in the shallows.

I drove down 116th Street to the Jamaica Bay side, and headed for Waldbaum’s super market at 113th Street. The store, where I worked part time in 1964 and ’65, has been remodeled in the front and reorganized on the inside. I went to the back of the store where I used to work in the dairy department. The fixtures have been replaced, but the old tile walls are the same. 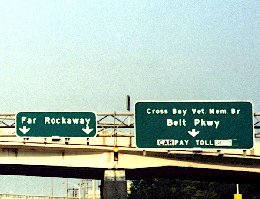 On an impulse, I got back in the car and headed back down Beach Channel Drive, past the Cross Bay Bridge, looking for Rosie’s Bait House. It’s still there, and it looks exactly the same as it did in the early 1960’s when my friends and I used to rent rowboats from Rosie. We would row out onto the already polluted bay among the marsh islands covered with razor sharp sawgrass stubble. The location was perfect for underage drinking and trespassing visits to the Idlewild Airport runways.

I turned around and headed out on Beach Channel Drive to my final destination: Riis Park. That stretch of road was the route I took every day on my way to Brooklyn College, after I turned 18 and could finance a used car with the help of my father and brother. The houses that face the bay, the Marine Parkway bridge, even the road itself looked like they hadn’t changed at all since I left. The Riis Park parking lot was spacious and empty, just like it always was in the off-season. I wonder if parents still bring their teenagers there to teach them to drive without fear of meeting another car. 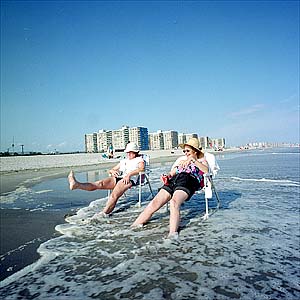 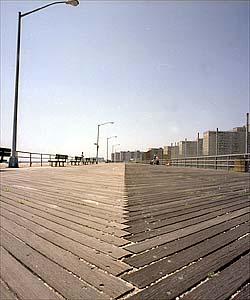 The Park buildings look like they’ve been closed for years. The Romanesque architecture makes it look more like a misplaced museum than an abandoned bath house. The overwide boardwalk and expanse of white sand beach took me back to the years even before I was born and before all the daytrippers opted for Jones Beach. A few bicyclers and roller bladers were my only company, along with the omnipresent gulls.

The sun was heading for the water past Breezy Point, so I headed back for the suburbs. I drove down Rockaway Beach Boulevard through the neighborhoods where some of my friends used to live. There didn’t seem to be much change in the area, still single family homes, mostly two storey sitting on small lots. I don’t remember if I passed by the gas station where the jet engine landed, but I know I passed 129th Street with no premonition of disaster. I went all the way to 94th Street, checking to make sure that the police and fire stations were still there before turning on to the Cross Bay Bridge.

At the last minute, I turned down the side street that goes by the First Congregationalist Church. There’s a new minister’s name on the sign, but everything else looks just like it did when I went to Sunday school, and my brothers sang in the choir, and my mother sold our used paperbacks at the Ladies Aid rummage sales and my father went every Christmas. And I got married there and got into a Cadillac that my brother had borrowed and went to JFK airport and got on an airplane and never came back.

Except, occasionally, in the off-season.

Thank you so much Alan, for sharing your experiences with all of us.  You brought back a lot of memories for me and I am sure for so many others who grew up in the same area of Rockaway that you did.