Yes, Bernie Madoff Was a Graduate of FRHS, Class of 1956

Since the story broke last week, I have been inundated with emails from alumni as well as print and TV reporters wanting to know more about Bernie.  According to the story that appeared in the New York Daily News, it seems that Bernie, Class of 1956 may turn out to be the world's biggest swindler.  The story has been reprinted below. 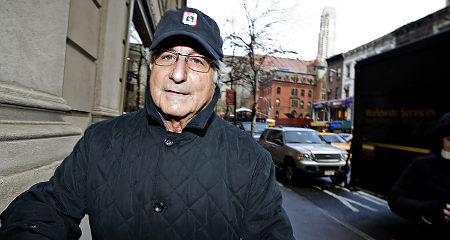 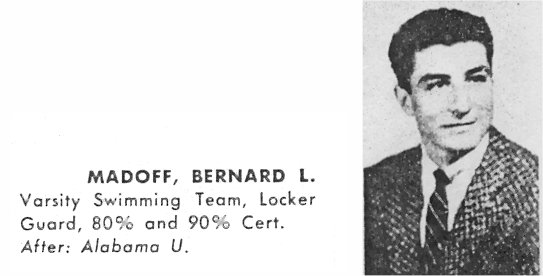 Bernie Madoff was raised in working-class Rockaway Beach and played in south Queens - but he was more at home in uber-rich Palm Beach and the playgrounds of the south of France.

The self-proclaimed mastermind of a $50 billion Ponzi scheme added poise, polish and Park Ave. to his Beach Channel Drive pedigree, along with multiple mansions, yachts and jets.

With a smile and a soft sell, Madoff, 70, preyed on hundreds of "affinity investors" from his social, religious and charitable circles - and shattered the lives of those who trusted him.

Victims and observers described an affable but apparently ruthless con man who could extract millions from a miser and make a duffer feel like Tiger Woods.

"His was the shrewdest hustle... because he hustled you and you didn't know you had been hustled," said Laurence Leamer, author of "Madness Under the Royal Palms: Love and Death Behind the Gates of Palm Beach."

The scam's secret: "He seemed not to want your money or care about your wealth - and he was very quick to turn it down - so all you wanted to do was give him more," Leamer said.

A portrait emerged of a golden boy whose Midas touch drew in gilded clients questing for more - and never dreamed their money manager would strangle the golden goose.

The world's biggest swindler was born on April 29, 1938, in the Rockaways and graduated from Far Rockaway High School on Beach 25th St. in 1956.

He preferred the ocean to academics, joined the swim team and learned discipline from a swim coach who hired him as a lifeguard at the Silver Point Beach Club in Atlantic Beach, L.I.

"The Bernie I knew was a good-natured, happy-go-lucky guy, always smiling and kidding, who swam the butterfly very well and never got overly serious," said Fletcher Eberle, co-captain of the swim team.

"If you had said to me that Bernie was going to be chairman of the Nasdaq and make all this money, I never would have believed it possible."

The girls among the 512-student Class of 1956 held little interest for Madoff because he had already met his future wife, the perky Ruth Alpern, from the Class of 1958.

He told his class yearbook, the Rockaway Dolphin, that he was bound for Alabama University, but he actually went to Hofstra, majored in political science and graduated in 1960.

Wall Street beckoned. The 22-year-old Madoff had a $5,000 nest egg from part-time gigs as a lifeguard and a sprinkler system installer.

He parlayed it into a career in high finance and monstrous fraud. He pioneered the switch from old-technology trading to computer-driven transactions, which shaved seconds off deal-making, lowered costs and created stratospheric profits.

"He was like God to the people who gave him their money," said Charles Gradante, a co-founder of the Hennessee Group, who advises investors on selecting hedge funds and often chatted with Madoff at charity balls and cocktail parties. "He was idolized as the smartest man on Wall Street.

"Bernie claimed investment returns that no strategy known to man can produce," Gradante said. "He wore custom-tailored suits, but was never ostentatious, and drove a $100,000 BMW, but never a Rolls Royce."

"We would joke about the girls and the weather," Figliozzi said. "He would shake his head when the stock market went down and smile when it went up."

He was not shy about surrounding himself with the trappings of fabulous wealth: a 56-foot yacht, The Bull, was docked in Palm Beach. Another was berthed in Antibes on the French Riviera. His BLM Air Charter owned stakes in two jets.

The Madoffs lived in a $7 million duplex penthouse off Park Ave. and a tidy ranch house in Roslyn, L.I. In the summer, they repaired to an oceanfront retreat in Montauk. Their winter home was a $9.4 million Palm Beach spread with palms, banyan trees and bougainvillea.

There's an old rule among the country club set: "To court business, play golf." The Madoffs did just that, joining fancy country clubs from Palm Beach to Amagansett.

They even posted their handicaps on the Golf Handicap & Information Network's Web site - 9.8 for Bernie, 30.6 for Ruth.

Still, there were warning signs.

Investor Jon Najarian said he visited Madoff in 1995 in his offices in the Lipstick Building on Third Ave. to discuss a possible business deal and got an eerie feeling.

"He sat all alone on this vast, open trading floor facing the East River with computers and trading turrets but not a single trader in sight," Najarian said.

"It was the middle of the day, but it was completely empty. You had the feeling of this Enron-esque place where he brought the people he was trying to dupe."

Bernie. Bernie. Bernie. Whatever was he thinking? Ripping off the rich and famous? He will be fortunate if his private parts remain intact when the feds ship him off to the slammer for the shrinking remainder of his days.

Financier Bernard L. Madoff stole in a big way  an estimated $50 billion in a decades-long Ponzi scheme brought down not by AWOL regulators, but by market turmoil in an ailing economy.

Among Madoffs fleeced flock are the charity foundation of director Steven Spielberg, along with his DreamWorks partner, Jeffrey Katzenberg; acting couple Kevin Bacon and Kyra Sedgwick; and screenwriter Eric Roth, whose credits include Forrest Gump and The Curious Case of Benjamin Button. Not to mention dozens of big-name banks and investment firms in this country and abroad.

The elites dont like being on the receiving end of a scam and they have the clout to do something about it. Call it the best justice money can buy.

Its another way of stating this inconvenient truth: We value some victims more than others, pure and simple. Although we are loathe to admit or even to acknowledge such disparities in our wildly varying estimations of others personal net worth, thats just the way it is.

Despite decades of talk about equal rights and equal treatment before the law, we still value the rich more than the poor, the powerful more than the disenfranchised, whites more than non-whites, heterosexuals more than homosexuals, men more than women. These beliefs and the resulting attitudes certainly affect the kind of justice we mete out. Rape, for example, remains wildly underreported and rarely prosecuted when it is revealed. Convictions are few and far between.

Unlike Madoff, there are criminals who chose their victims with care and got away with, well, murder. Take serial killer John Wayne Gacy. As long as this amateur clown preyed on teen transients or male prostitutes, his death spree remained secret. His undoing was to choose a white boy from a local middle-class family as a victim.

Then there are all those bigamists who romance middle-class women out of their pitiful life savings and promptly skip town, never to be seen again. The public resources devoted to finding these small-time con artists are also small-time, consisting primarily of local police or sheriffs departments without the staff to do anything other than take down the sordid details and file them away.

But a federal court just agreed to apportion $28.1 million from the remaining assets in Madoffs investment firm to oversee its liquidation costs. The tax-funded resources of the SEC (better late than never) plus the tax-subsidized Securities Investor Protection Corporation are being brought to bear in a costly investigation that will cover the world.

Now thats big-time payback  all accompanied, of course, by an ongoing frenzy of media wailing, hand-wringing and teeth-gnashing. The rich and celebrated defrauded? Heaven forbid!

Meanwhile, despite the finger-pointing and tut-tutting in Congress, the Bush Administration has completely gutted the already toothless Wall Street bailout provisions limiting CEO pay, and the entire exercise in shoveling taxpayer money out the door has no credible oversight. (Its eerily reminiscent of Baghdad in 2004, during the waning days of the Coalition Provisional Authority, when pallets and pallets of shrink-wrapped taxpayer greenbacks disappeared off the backs of trucks, destination unknown.)

Failed executives of failed corporations thus enrich themselves and their enablers at the expense of current and future taxpayers. And members of Congress, having declined to vote down their automatic annual pay hikes, sank bailout legislation for Detroit with demands that workers give up yet further wages and benefits than they already have conceded in labor contracts that are phasing in over the next year.

Something has to give. A society of sharp disparities, whether in income, education, access to justice or some other critical way, is ultimately unsustainable. If we sink as a nation, it will be precisely because money buys a few of us much better justice than the rest.