Donna Gaines, Class of 1968
Latest Book Release and Review
'A Misfit's Manifesto: The
Spiritual Journey of a Rock &Roll Heart.' 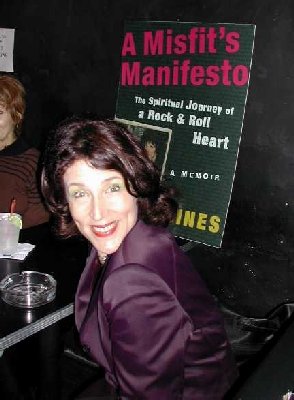 Anyone as deeply involved in New York City punk and death metal as Donna Gaines could probably crank out an entertaining memoir just by osmosis. The big hair scene, however, is rooted in a whole culture of proud dysfunction, of which Gaines is a sharp and empathetic citizen. Author of "Teenage Wasteland: Suburbia's Dead-End Kids," Gaines is an acknowledged expert on adolescent anomie and pop culture in the academic world. That's her day job. Also a hot rocker chick and a bit of a wonk, Gaines has been a fan of Rockaway-style punk since its birth. Did I mention she grew up Jewish, was addicted to fat pills, had an almost-famous entertainer mother, majored in sociology, and loves guns? "A Misfit's Manifesto" would be a fun read even if Gaines weren't so damn smart. She's blessed and cursed with spot-on recall: every rock show, boyfriend, overdose, and lost soul is disinterred and presented for our inspection.

It's easy to see how Gaines continues to connect with teenagers. Eschewing the detached enthusiasm of many rock critics, she's a perpetual fangirl, throwing herself into passionate pursuit of one hardcore act after another. She gravitates toward the dark and ugly truths of alienation, which are both expressed and somewhat relieved by the music she loves. At times the book is a breathless account of who joined what band when. More often, it's a deeply felt examination of an American outsider's insides. Having spent a lifetime understanding her own disenchantment from all angles, Gaines is in an ideal position to clarify the problems of adolescence for others.

By the end of the book, Gaines' seeming arrested development is belied by her clear and rational apprehension of her place in the world. This memoir is written not as a eulogy to the self, but mostly as a record of the time prior to major self-awakening. After a long chapter detailing her friendship with Joey Ramone and a touching account of his death, Gaines describes with sincere humility how God came to her one night in the form of a glowing hot-pink blob. After all, she notes, it's very rock `n' roll to get spiritual at middle age.

A Misfit's Manifesto: The Spiritual Journey of a Rock & Roll Heart
by Donna Gaines