Aerial View of Edgemere Taken in 1929 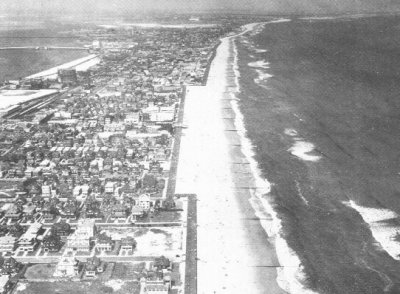 From The Rockaway Museum
by Emil Lucev, Curator

When this aerial photo was taken in 1929, the new city boardwalk was completed to Edgemere, and work was progressing towards Beach 19 Street, the terminal point at the time, due to the fact that Edward Roche and others did not want a boardwalk over their beach, and claimed their Riparian right to the shorefront of their respective properties! Roche and the owners of Ostend Beach (together having beachfront at Far Rockaway from Beach 19 Street to Beach 9 Street) stood firm and were willing to defend their right in court...no matter what! A good fight was brewing, despite the fact that the city was going to fix up the beach and build the boardwalk to the Nassau line...but only if the city owned the beachfront. The city could not fix or rebuild private property, according to the city's charter.

The plans called for the boardwalk to end at Beach Second Street, and a few newspaper articles stated that caution was being exercised in the push for the Far Rockaway east portion. The city was said to be preparing legislation to get the land, and corporation counsel went to hell and back (if you will) to prove that the people have a right to the foreshore, and it was not intended by the English or colonial government for property owners to own the foreshore...yet they did and no one ever went to jail over it, or was ever called to account for owning the foreshore. The greater percentage of deeds did read-to the low water mark-of the time. To top it all off, at the Nassau border, west side, and the city claimed to the low water mark of 1925, when title to the beach was vested in NYC in 1937.

But across the border in Nassau County, Lawrence vs. Hempstead, in the1880s, the Nassau courts decided that Lawrence owned outwards of 250 feet into the surf! This case is considered 'supra' in legalese, which means that neither God nor man can change it! In contemporary thinking, the city of New York says that the people of New York have no right to the foreshore (beach) when it says so. Due to the stupidity and arrogance of people, and the courts, our beach is now treated as a cash cow for the empty city coffers! At the bottom of today's historical view, the foreground is at Beach 125 Street, with Edgemere and Far Rockaway in the background. The old gashouse, Crossbay Bridge, and the LIRR trestle are seen at the top left. Long Beach bar is at the top right, and notice how the Long Beach bar causes the beach at Far Rockaway and Edgemere to be much narrower than the rest of the peninsula! Nothing has changed in this respect, and many people are asking, "Where's the beach?"