Gordon Freed, Mets #1 Fan
To Be Featured On VH1

For those of you who expected to see Gordon's segment on VH1, while the footage is in the can, they haven't decided on a date to air it.  So, keep checking this location for further updates.  Once a date had been scheduled, I will post it here.  Until then, I will leave the original information and photos below on this page.  Thanks,  Skip

Many of my long time friends know of my "obsession" with the NY METS!  Last year, I was named by the Mets official newspaper as the first member of Mets Fans Hall of Fame.  That honor and other Mets related experiences have led me on the road to be featured on a segment of a new VH1 show coming in August. The show will be called TOTALLY OBSESSED! The VH1 crew came to my home on Sunday, July 11; filming me from 8:30AM until 1AM. They flew my brother Marc(1971) in from Ohio to be part of the segment. Two other Rockaway grads will be part of the show too: my close buddies, Sol Pasik(1969) and Tommy Koenig(1971).  They have advised me that my feature will be aired the week of August 22. I will know the exact date later in the summer. As you can imagine, I am very excited. I will update MY website when I find out more information. WWW.METMANFL.COM

I am including a few photos. The first one is of me getting all wired up for the interview. The 2nd one is the camera and lighting equipment in my Mets room. The 3rd was used at the beginning of the taping. 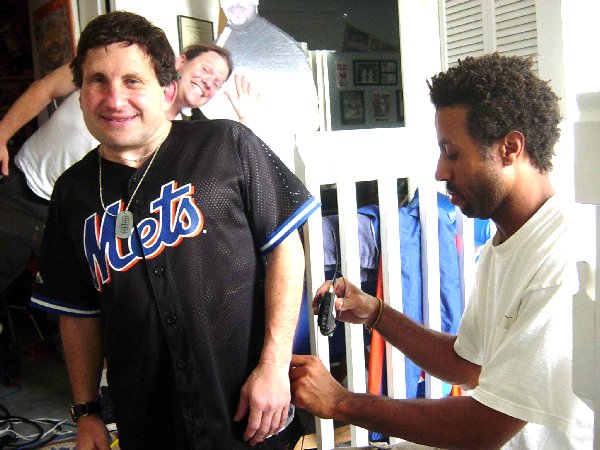 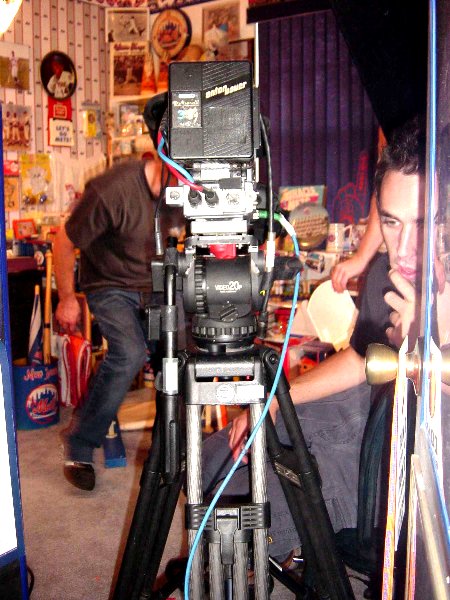 Gordon Freed, Class of 1969 Honored
As The First Person To Be Inducted Into
The Mets Fan's Hall Of Fame!

A few days ago, Gordon Freed, Class of 1969 was honored as the very first entry into the METS FAN'S HALL OF FAME!  The Mets official newspaper, Mets Inside Pitch, decided to create a H.O.F. for fans.  Seven of his friends sent in letters of nominations in his behalf.  In the June 2003 issue, Gordon was selected among the top 5 candidates. The Sept. issue just arrived with the final results. Gordon was named as the first Mets fan to be entered; and as you can imagine, he was very excited!

He has created a personal and fun website where there is a page that shows some of his large Mets memorabilia collection as well as lots of photos of him with Mets players present and past.

Congratulations to Gordon for this wonderful honor.  If you would like to view Gordon's site, please go to www.metmanfl.com