The Boos Were Flowing

Mayor Mike Gets Bronx Cheer In Rockaway
Reprinted from the Rockaway Wave 3/8/13
Check out their website at www.rockawave.com 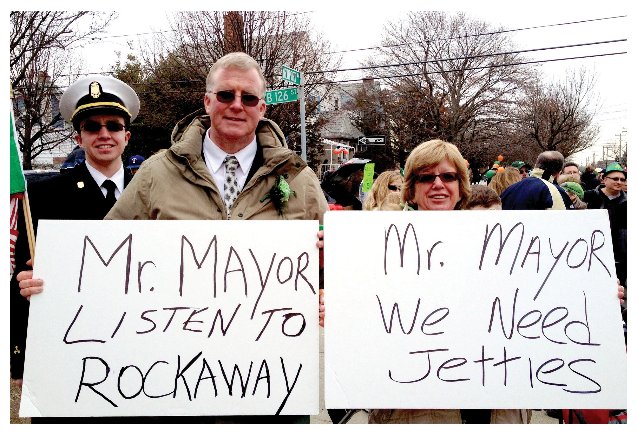 Although it’s not exactly news when Mayor Bloomberg gets booed in Rockaway, The Wave figured it could not go without mentioning as this was Bloomberg’s last Rockaway march as mayor. In a clear attempt to avoid the boos and catcalls, Bloomberg marched amidst members of the Department of Sanitation who were cheered loudly for their heroics in the aftermath of Sandy.

The parade, held Saturday, March 2nd, was called “the greatest” in the 38 year history of the event by many in attendance – both in the march and in the deep crowds lining the streets. Throaty cheers rung out for many in the parade as people signaled their admiration for various groups and individuals. The only group rivaling the DSNY as crowd favorites were the Mormons also known as the Latter Day Saints. Dressed in their familiar yellow jackets and vests, a couple hundred Mormons joined the march for the first time this year. Showing appreciation for the teams of Mormons who have worked tirelessly throughout Rockaway, the crowds on block after block roared their approval and thanks.

Even on this grand and happy day that marks the unofficial start of spring, however, Bloomberg could not escape the disapproval of many who paused from cheering to heckle the mayor. The harsh treatment was noted by many media outlets in the days that followed but the actual steady stream of ill will was caught on video by John Kenny at NewYorkTrue.com who followed the mayor along the route. Kenny reported that Bloomberg broke from the parade to shake hands only once – with firefighters at the firehouse on Beach 116th Street.

When asked at a press conference later in the week about the Rockaway reception, Bloomberg said, “I understand the frustration. And if you take it out by booing the mayor, OK, so what. I mean, you know, it was still a nice parade.”

Bloomberg has irked locals in the past. He’s been accused of making anti-Irish jokes and favoring Manhattan over Rockaway as he allows wine drinking in Central Park but forbids beer on the beach. He took a jab at locals in October when he said people who would not evacuate were being “selfish.” And, of course, there was widespread outrage when he insisted the New York Marathon go on while critical help was still needed in Rockaway and other areas.

Other politicians drew mostly polite applause. Senator Chuck Schumer also marched and though a few zingers flew his way, he was far more welcome than Bloomberg. Schumer brought a bullhorn and walked unshielded by crowd favorites or flunkies. He didn’t hide from the crowd; he encouraged it loud and clear: “Let’s hear it for the Rockaways! Let’s hear it for rebuilding the boardwalk.

Let’s put some jetties in!”