On Rockaway Beaches, a Job That's
as Rough as the Surf 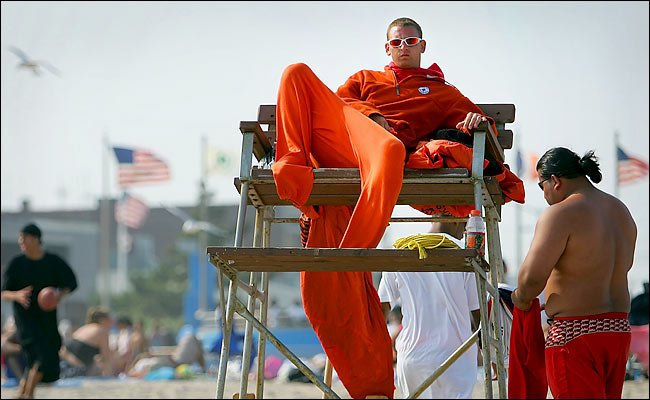 In the Rockaways, the lifeguard chairs are placed almost one to each street. For example, a lifeguard might say, "I work the 104th Street tower."

One perk of being a Rockaway lifeguard is being able to get takeout food delivered right to the stand. This is only one of the ways in which the urban ocean lifeguards of the Rockaways say their job is unlike that of their counterparts out on Long Island and down the Jersey Shore.

In the Rockaways, trains and buses disgorge hordes of people escaping the city's hot pavements. They hit the water with a bit more desperation and perspiration than your average beachgoer, lifeguards say, though many bathers have little experience with the ocean, if they can swim at all.

There are language barriers, and patrons can often be unruly.

Given these conditions, Rockaway lifeguards are proud of their strong record against the sea. While there have been two deaths in the water at Rockaway this year, they occurred after the lifeguards went off duty.

"Half the job is just herding sheep," a guard who has been working at Rockaway for 10 years said on Saturday. "You can spot who has a decent swimming stroke and let them go out further. But on crowded days, you really just want to keep them where they can stand."

The city has roughly 1,000 lifeguards working at the city's 52 pools and seven beaches. More than half of the beach lifeguards work the Rockaways, with its 7.5 miles of patrolled beach.

It is one of the seven beaches in the city, but it is really the only one with sizable surf. The lifeguards guard the beaches near the housing projects in the Beach 50's and 60's, and patrol the beaches in the 90's, used often by Queens residents who park in the municipal lot.

Many beachgoers in the 100's are residents of the oceanfront high-rises there. The beaches around Beach 116th Street in Rockaway Park largely belong to the crowd from Brooklyn and Manhattan who spill out of the A train.

Lifeguards are supposed to be diplomatic when swimmers give them attitude. But taunts and threats can quickly turn into pleas for rescue.

"At most ocean beaches, the kids have grown up with swimming lessons, and people tend to obey authority a bit more than here," said one lifeguard. "Some of these kids are from tough neighborhoods and they're not going to listen to a guy with a whistle. But once they get a lungful of water and can't swim back, the tough attitude changes." (That guard, like his colleagues, would not give his name because the Parks Department does not allow lifeguards to speak to reporters.)

For swimmers, the ocean, like the city they are trying to flee, presents its own special perils. At low tide, some try to wade or swim to sandbars and can be deceived by the uneven ocean bottom. At higher tides, strong riptides can pull swimmers out and cause them to panic and become exhausted.

A lifeguard's most vital tools are keen vision and judgment. By whistling swimmers away from such perils as rock jetties and riptides, the best rescues are performed without ever leaving the stand.

The lifeguard uses a series of short whistle blasts to get a swimmer's attention. If the whistle is ignored, the lifeguard may swim out to order people to shore. Even then, some swimmers may not comply.

"Sometimes they're drunk or they say, 'I can swim' or they just don't respect you," said one lifeguard. "The only thing we can do then is tell them they're going to get a summons. That usually works."

One long whistle blast means rescue. The lifeguard leaps off the stand, grabs his rescue buoy and sprints into the waves. He porpoises out, pushing off the bottom and repeatedly diving into the surf and then shifting into a crawl with his head out of the water to maintain sight of the swimmers in trouble. He tosses them the buoy, calms them down and swims them in.

To be a lifeguard at city pools or beaches, applicants must complete a 35-hour training course and be certified in CPR. There is plenty of camaraderie. Perhaps half the lifeguards at Rockaway Beach are Rockaway natives and many commute along the boardwalk on old-fashioned cruiser bikes. After work, many gather at Connolly's bar on Beach 95th Street, a longstanding lifeguard hangout with photographs of Rockaway lifeguard crews present and long past on the walls.

Besides protecting swimmers, lifeguards must often break up fights or chase wind-tossed umbrellas that somersault dangerously toward other patrons. There are constantly reports of lost children, for whom the lifeguards usually begin walking westward to search.

"For some reason," one veteran lifeguard said, "when little kids wander off, they almost always walk in the direction of the sun."