The Rockaways seem to be torn between suburbs and the city, said filmmaker Mark Street. It reminded me of teenage girls. His experimental feature film, Rockaway, which premieres at the Tribeca Film Festival this month, is a meandering study of three high school girlfriends who live on the thin strip of land east of Manhattan and a stones throw from Kennedy Airport.

Its an odd and interesting landscape, Street continued. For about a year he and his assistant took the A train from Brooklyn to the Rockaways and wandered around the neighborhoods. They were mesmerized by all the contradictions in this part of Queens, which is at once so close to the heart of New York City, but a metaphorical hundred miles away at the same time. 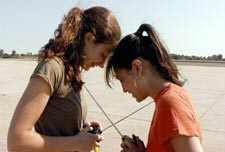 The film follows Kelly, Merida and Juanita on their last night of high school. Most of the film is improvised dialogue. And there isnt much in the way of a story arc or conflict. Its an avant garde film, Street isnt afraid to admit.   The characters are simple sketches of different aspects of the Rockaways. Merida is sexy, wise and poor. Her father works at the airport, but would never be caught dead wearing his uniform off-duty. Planes flying in and out of Kennedy crisscross at least half the scenes.

She knows why her friends never hang out on her front porch, on the poorer side of town. If she has one wish for her post-graduation life, its to live in the city in her own apartment.  But when she does go to the city, she doesnt quite know what to do with herself. To more conventional suburbanites in New Jersey or Long Island, Merida would be urban, glitzy and cool. But in the trendy East Village shes a country bumpkin, an ingenue in last seasons jeans.

Juanitas mother is a politician and, from all we can gather, shes the square of the group. Her story isnt as fleshed out as the others. One gets the feeling a lot of Juanita was left on the cutting room floor. Notwithstanding, she does get the best line of the group: If my mom knew what was inside me, shed cut it out. Shed have my thoughts removed like some sort of cancer.

The most fascinating character by half is Kelly. Is this it? she asked. Is this my life? Its the seed of all angst-filled adolescents. Naturally, shell be going to Oberlin in the fall. Kelly is dating a white-haired bartender named Jan, whom we can only assume has made a lot of questionable decisions in his past.  The idea of Kelly and Jan having sex is disconcerting at best. But we know their relationship is physical because of the way Kelly introduces it: Im having sex with a white-haired dude. I look at him sometimes and think, hes a loser. Her father is a cop, her mother recently died of cancer and they live in a firmly middle-class home.

The effect of this personal narration works in the way a journal might. And we believe it because 17-year-old girls are wont to pick apart all the details of their lives in just this way. Other parts are a little off-kilter though. We wonder if girls like Merida and Kelly really own a pair of remote controlled cars, or if it was just an excuse for Street to film decaying Floyd Bennett Field. Same goes for a scene of the three reciting lines from a play in an abandoned frame of a house. We can only wonder where the nearest mall is, and isnt it three girls short.

But Street wants to use his characters as metaphors for the city and vice versa. And there are times when it works. When the three are taking pictures of themselves at a conical bus stop painted with waves, its easy to appreciate just the composition of the scene. The most cinematically satisfying moments are when the girls dont have to carry the movie with dialogue, but are simply subjects in the frame.

Streets next project is filming a series of cities, in the tradition of Russian realist filmmaker Dziga Vertov. Street will be profiled on Channel 13s New York Voices on Friday, April 22nd at 9:30 p.m. and his film Rockaway will screen at the Tribeca Film Festival on Friday,April 22nd at 7:15 p.m., on Sunday, April 24th at 6:15 p.m. and on Friday, April 29th at 4:00 p.m. Tickets are $10 and available at the door. See www.tribecafilmfestival.org for more information.

There are no plans for it to screen in the Rockaways yet.

To view this story on the Queens Chronicle site, click here.